Take Back the Street Picture: NYSAT 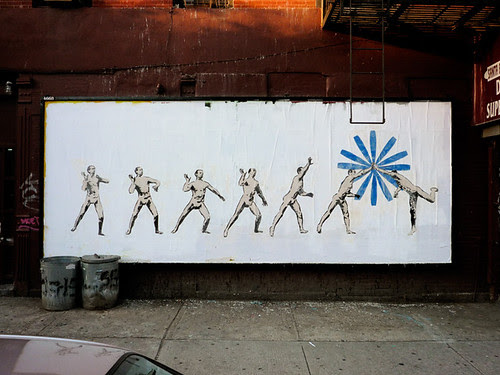 Pictures are part of our modern landscape, and help create it, too. New York City tourists know they're here because their experience matches their image of it — an image formed often and substantially by pictures.

Paraphrasing Sontag: our streets are thickened by billboards, animated signs, and advertisements adhered to every surface, an irresistible mental pollution to which we are addicted, and we crowd along the avenues in an image-addled stupor, feeling that our citizenship is more stable than it is.

So...wow, that feels kind of negative.

But as you've heard me say in class, the best way to recognize their influence on us is to imagine a day without them, entirely off the grid, no pictures of any kind. I know this strikes a nerve somehow because I see you smile as I say it.

My friend Jordan knows the power of pictures, especially the advertising pictures that assault us on the sidewalk. His epic struggle against the vis…
Post a Comment
Read more
More posts